"Pingat Jasa Malaysia" can be translated as "The Malaysian Service Medal". The medal was offered at the end of 2004 to the Commonwealth countries who served Malaysia in her fight against aggression and terrorism. Those Commonwealth countries include Australia, New Zealand, Fiji, the United Kingdom and, never to be forgotten, the Gurkhas.

The citation that accompanies the medal reads:

This medal is awarded to the peacekeeping groups amongst the Communion countries for distinguished chivalry, gallantry, sacrifice or loyalty in upholding Peninsula of Malaya or Malaysia sovereignty during the period of Emergency and Confrontation."

Foreign and Commonwealth medals have to be accepted by The Queen on the advice of the Government of each Commonwealth country involved where she is head of State. After a short period of consultation the Governments of Australia and New Zealand accepted the medal without restriction for their citizens. The British Government, however, announced in the House of Lords that they would refuse the Malaysian medal for British citizens on the basis that the award was contrary to British Medals Policy.

In early 2005 intensive lobbying commenced to try and reverse that decision and after a few months the Secretary of State at the Foreign and Commonwealth Office (FCO) announced that the FCO had submitted a paper to the Committee on the Grants of Honours, Decorations and Medals (known as the HD Committee which advises The Queen on these matters) asking them to review their policy in respect of foreign awards and the PJM.

After several months the HD Committee met on the 7th December 2005 to carry out the review but their recommendation was not announced until a written Ministerial Statement was made in the Commons on the 31st January 2006 - the day after medals were presented in Australia where the Pingat Jasa Malaysia can now be worn with pride.

The British HD Committee’s recommendation, however, was that British citizens could accept the medal but they would not be allowed to wear it. This astonishing situation means that The Queen has granted a wearable medal to her Australian and New Zealand citizens, but has refused the right to wear the PJM to her British citizens.

Citation that accompanies the Medal

Andy has sent us a copy of the Citation that accompanied his medal when it was posted to him by the Malaysian High Commission.

The words speak volumes for what the PJM is all about: 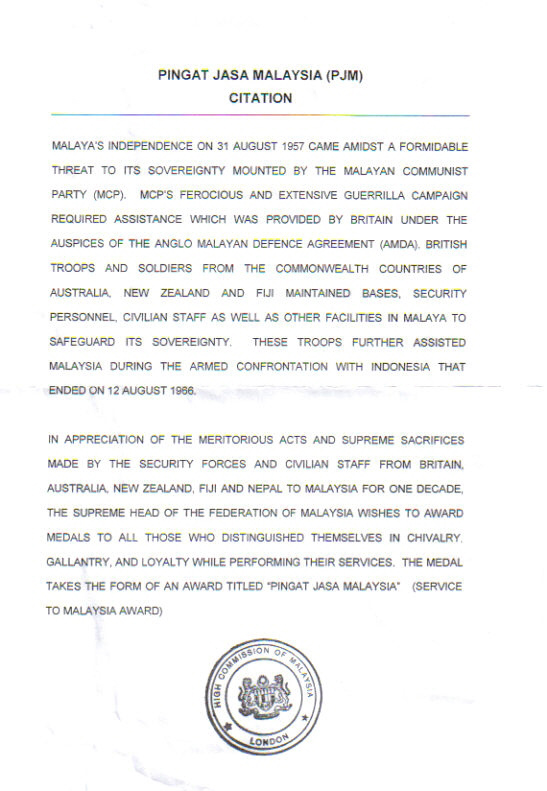