In this group of pages we shall set out just a few of our memories from those days in the Far East.

Whilst many years have passed and we grow inexorably older, our service in Malaysia remains crystal clear in our memories - the places we served, what we did, who we served with. Our families. Here is an example of what we meean. It is written by a lady who went to school in Malaya and eventually became a nurse in Changi.

"My memories are of when I was in Malaya from 1954 to 1957. My father, who was in the APTC was attached to the 15/19th Hussars who were stationed in Ipoh. I went to school from 1955 to 1957 at Slim School in the Cameron Highlands. We used to travel from Ipoh to Tanah Rata where all the kids used to meet and we were taken up to the Cameron Highlands on the very windy road, in those dreaded PIGS!! in a large convoy with tanks at either end and in the middle for protection. The PIGS were horrible metal enclosed trucks with a little slit for light and air, and were not very comfortable! We used to do this at the start and finish of term.

" While at school we had a fantastic time, albeit the teachers being rather strict, and were like one happy family. Our parents used to come up for our sports days and there were plenty of activities if we wanted. At night we could hear the bullets flying about and had the Gurkhas on patrol around the perimeter.

"Towards the end of the Emergency we actually travelled up in the big 3 tonners with escorts but at least we could see where we were going and could breathe fresh air.

"During the school holidays, it was nice to be at home and I used to follow the boxing team from the Hussars to various places e.g. KL as my father used to train them. There was always something to be done and we (my family) travelled all over Malaya.

"I had plenty of friends, some of whom I still keep in contact with and am pleased to say that Ray & I are going to a Slim School re-union in October, that I am looking forward to. Tony Talbot, who was the editor of the NMBVA journal was also at Slim.

"It was a marvellous experience and one that I am very pleased to have been able to take part in. I loved it out there. I was a nurse in the WRAF and in 1962/63 I was posted to Singapore and was stationed at Changi hospital.

" I have been back to Malaysia and Singapore a few times and have seen the changes but the old memories are the best."

[Ed: Lennie is eligible for the PJM in her own right in respect of her WRAF service. You can see some photographs of her and her husband Ray (ex-Sherwood Foresters) when they received their medals in London in July.

If anyone has any memories like Lennie's ... or any images ... please send them to me and we'll publish them on this web site. Speaking of which ... here's a great memory from Sue Brooks who sent in this piccie with a message: 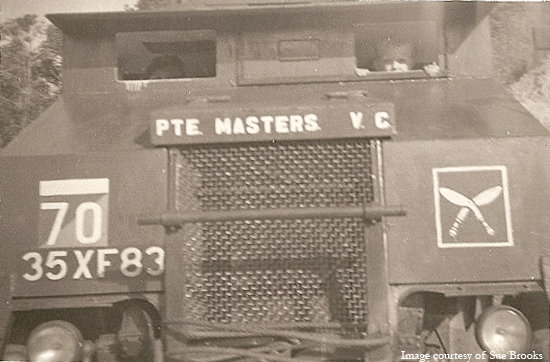 Sue said: "This is a pic to go with the article by Lennie Brookes. I also travelled in those convoys as a child. The other name for the vehicle was 'the Coffin'.
I hope this brings back memories for Lennie."

To read more memories, and to see some stunning images, click on the list to the left - we hope you will enjoy these pages as much as we have in publishing them.