Roy has very kindly sent more images from his service when he led a Malay Police Platoon which was based deep within enemy, Communist-controlled, territory. His base was called Fort Brooke ...

Roy's comments are in the captions below each image. 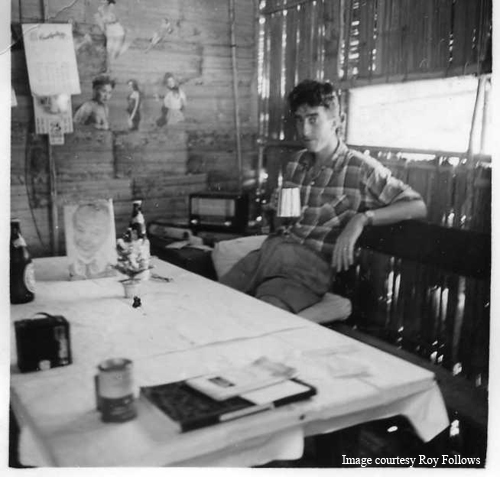 "Christmas Day in Fort Brooke. Roy Follows enjoying one of many beers. Note the Paludrine instead of Christmas pudding! Incongruous, drinking from a Silver Tankard in Fort Brooke, but so very true. They were a surprise present which came in by AD (Air Drop) from the managers of Socfin, a large rubber and palm oil estate where I was based with No 10 Police Jungle company when in Johore." 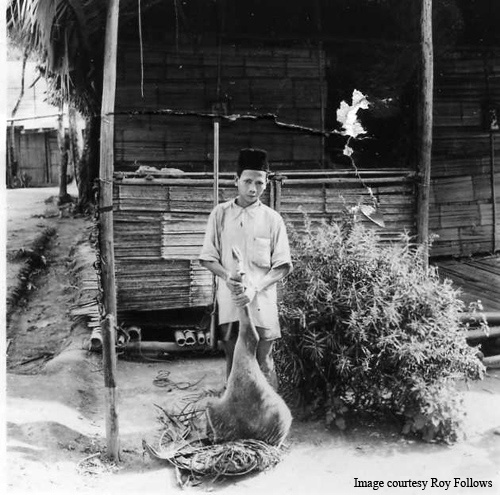 "Ah! Fresh meat! A leg of something? Could be a type of deer." 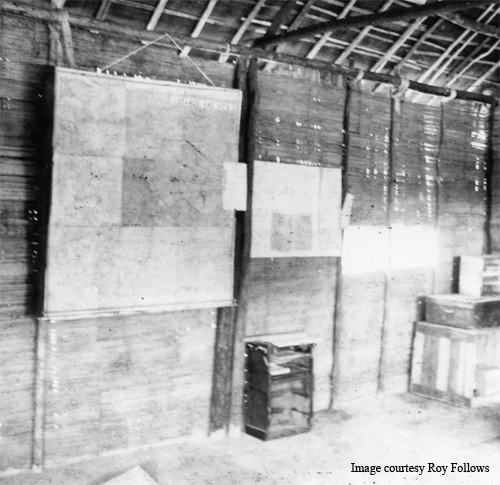 "Operations Room, Fort Brooke. From these wall maps of the whole Brooke region, I knew the Map References of every SF (Security Force) patrol as a result of daily radio contact with those patrols." 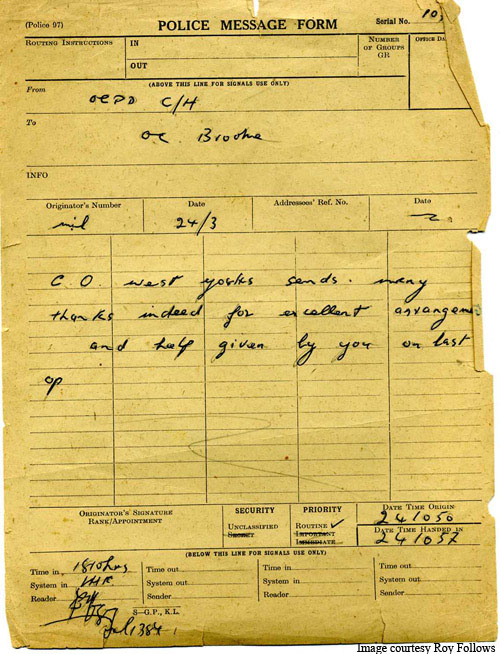 "A thank you message from OC The West Yorks." 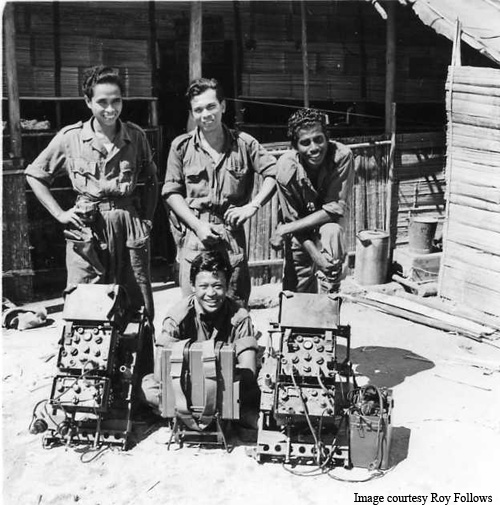 "The Fort's Radio operators. The carrying straps of the 'set' in the centre can be seen - therefore, this set would be the type to use when on operations."

[Ed: Can anyone identify these radio sets?]

Fantastic images! And we hope there will be more to follow ... including the rebuilding of Fort Brooke after it had been pounded by hurricane-force winds!

We are not going to be disappointed!

Roy has sent us some images of the rebuilding of Fort Brooke after the hurricane-force winds all but destroyed it. Let Roy tell the story ...

“ Fort Brooke, being perched on the top of a knoll 2500 ft above sea level and surrounded by mountains some of which were 5000 ft high, was subject to unpredictable and quick changing type of weather. This could go from the fort being shrouded in cold clinging mist for days, causing the temperature at night to drop dramatically, to brilliant sunshine the next day, to hurricane force storms with, what seemed like turbo-driven rain, coming in at near horizontal.

These tropical downpours some times caused damaged to the fort’s flimsy bamboo and atap building. But it was not only violent storms that did this. Occasionally a parachuted carrying supplies would completely miss the DZ and land amongst the fort buildings and, before the canopy had collapsed, it would have dragged its heavy load into one of the buildings thereby damaging it.

Also there were occasions when the parachutes failed to open. On two occasions when this happened, instead of plummeting down and landing away from the fort, the supplies crashed into it. One time petrol for the transceiver generator demolished the little kitchen attached to my shack, where cookie had left pans on the fire preparing my rice etc. It was only by his quick action in putting out the fire that prevented the ruptured containers of petrol igniting, and perhaps burning down the fort . Oh Dear!

It was after a few days of heavy rainfall that during the night the rain turned into a hurricane, battering the fort relentlessly . Groping around in the pitch black, I could hear the uptights, roof supports, rafters etc of my shack groaning as it was pounded by the wind and rain. I expected any minute for the roof to be ripped off. It seemed to go on for ages and although I had been informed during the night that there was damage, it was only at first light, that I saw what the storm had done to the fort. It had been partially wrecked.

First thing I did for quick roof repairs was to request a supply of roofing felt to be included with the next air drop. Then it was a case of organising from the local tribe of Temiar a workforce to repair /rebuild the place.

The outer and inner walls of all the fort buildings were made from split bamboo. Many people (including myself, until seeing it) were not sure what ‘split bamboo’ was, other than it being bamboo. Not wanting to appear like some smart a***, but for those who are not acquainted with it, I'll explain. Taking a piece of bamboo about 30 ft long x 4 in diameter, a tribesmen used his parang to make cuts all the way down the length, i.e. top to bottom a number of times, and in different places, as well as all around the circumference . He would then open out the bamboo, leaving himself with a piece 30 ft long and a about a foot wide . This is then cut into what ever size pieces are required. I must point out the tribesmen were not into numbers, I've had to used them in helping to explain. 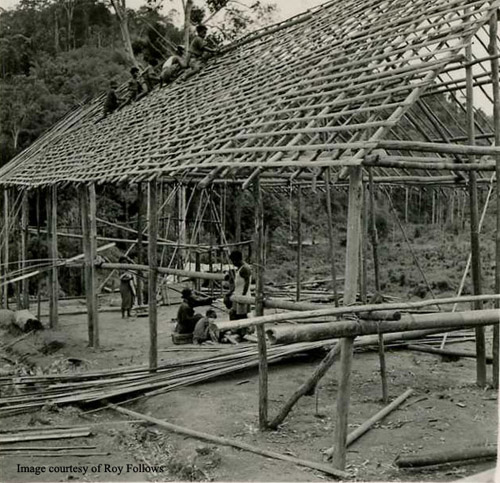 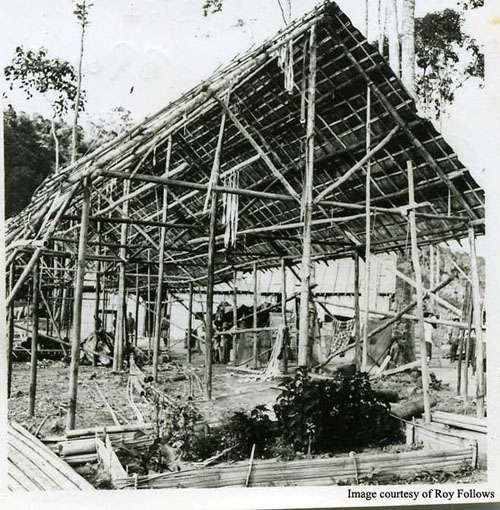 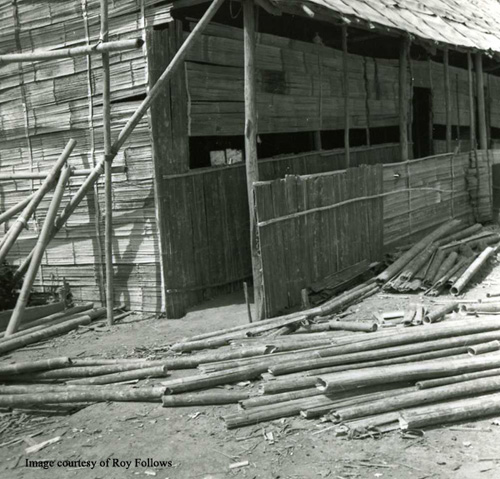 "This looks like split bamboo, cut, ready to be opened out." 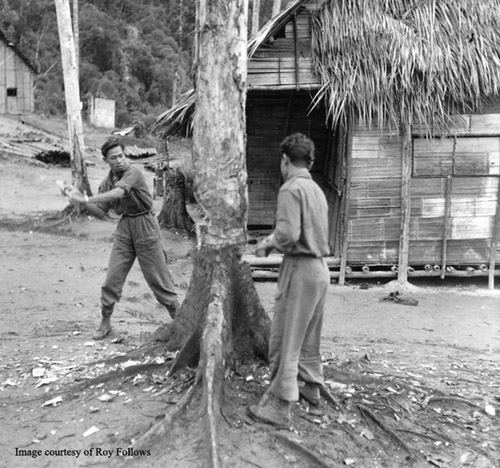 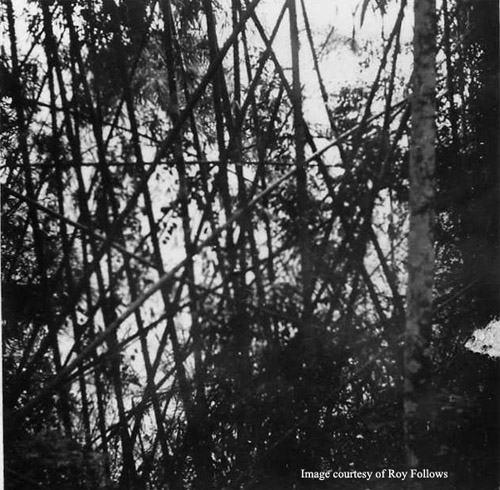 "Bamboo - wicked stuff to be in. From the amount of sky visible, I must have had the camera pointing upwards." 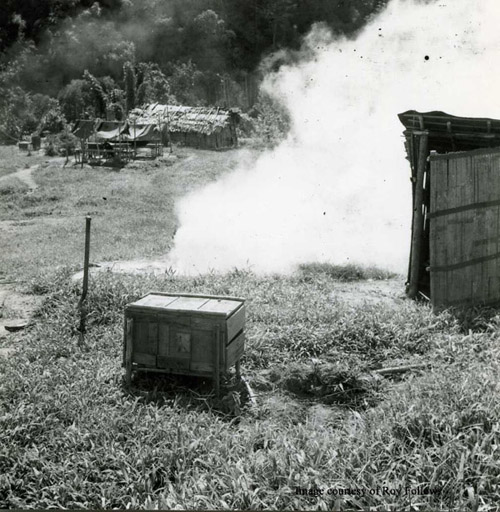 "My 'bog' goes up in flames. In the hope of getting rid of the flies, I dropped a phosphorus down the hole. Talk about something hitting the fan! The bomb blew the 'bog' to pieces where on it caught fire! But it got rid of the flies."

Hope you find the photographs interesting."

We are delighted to inform readers that Roy Follows has been honoured by Malaysia. We have just heard (September 2007) that Roy has been awarded the Pingat Pangkuan Negara (PPN) in recognition of his meritorious service and valuable contribution in further strengthening the existing good relations between Malaysia and the UK: 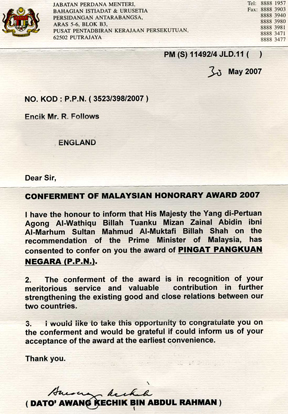 Congratulations, Roy. We can't think of a more deserving recipient.